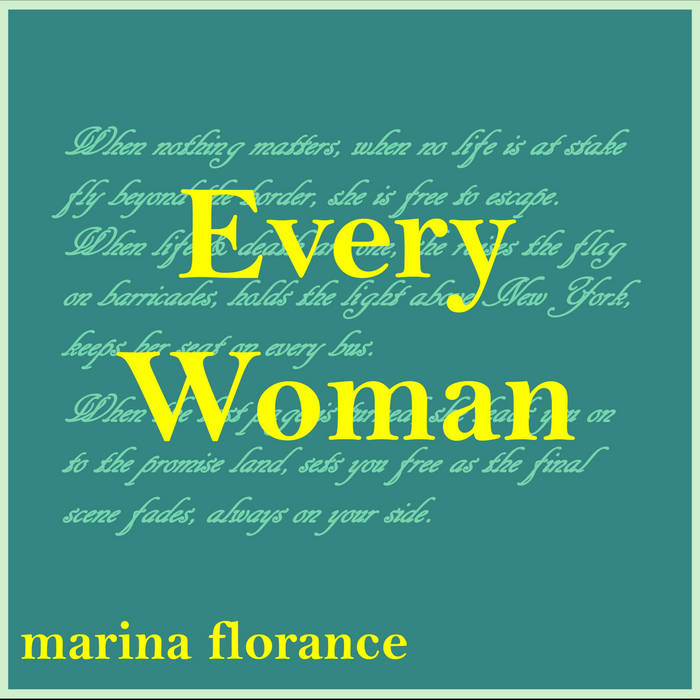 As featured in Louder Than War, the latest song from Norfolk’s wonderful warm ‘chocolate voice’ is an ode to Every Woman and is being officially released on our label with this link July 4th and on Spotify and ITunes two days later on 6th July. Every Woman was penned by Marina Florance and Richard Pierce, and features Marina’s distinctive sumptuous, calming storytelling with a welcome return of the much admired voice of Cathryn Craig. Accompanied by subtle fiddle and judicious use of bass guitar from Mark Jolley, Marina has also added the guitar and produced this soothing track herself. Independence Day seemed an appropriate date to release this track, with its hint of Americana, celebrating inspirational women.

Here are the thoughts about the track from the two writers.
Marina Florance :
This song came from a number of places, the first being a feeling of total freedom, freedom from reliance, liberty from fear; a feeling that anything is achievable when all your negative thoughts are overcome by the knowledge that you are just you, that nothing can change you, and that being you is the best thing in the world. This led to a wonder at what women can achieve in the most difficult of circumstances, what they’ll stand and fight for, how they’ll protect their family with their own life if necessary, and, when there isn’t anyone left to protect what they are capable of achieving for themselves.


These thoughts made us think about photos of people’s friends, family etc, because, on social media sites, people often post old photos of loved ones, of days gone by, and those are photos usually more at home on the sideboard in our living rooms. However, with the advent of social media we find that facebook remembers our memories for us, and they appear when we least expect them. This made me realise that the photos we post today are our future history.


Regarding the video of Every Woman:
We decided to celebrate these photos by asking people to share photographs of themselves of the inspirational women in their lives and have been overwhelmed by the response. People chose women from animal rights activists to motivating artists, from women in space to women in water, from rousing human rights activists to mums, wives or daughters, all as inspirational and strong as each other. The public figures in the video are: in no particular order: Virginia McKenna, Ellie Simmonds, Debbie Harry, Tara Brach, Diana Spencer, Rosa Parks, Joan Baez, Joni Mitchell, Sally Ride, Louise Bourgeois, Rosa Luxemburg, Carole King, Marilyn Monroe.

Thoughts from Richard Pierce:
It might seem odd for a male lyricist to be asked to write the words for a song called Every Woman, and I’m quite humbled, to be honest. Marina knows that what’s driven my writing is my wish to portray strong female characters, not caricatures of women like we see in much modern literature and song-writing.

This time the process was very different, because Marina emailed me with this idea of a song about the “universal woman” and asked me if I thought I could put some lyrics together. And while I was scribbling this vision crystallised of linking famous inspirational women with the everyday lives of women who’d never be famous but who inspire us just by living (like my mother, my wife, my daughters) and by challenging what’s accepted. The thing for me is that we do still live in a patriarchal society, and that pains me greatly. Also, Marina’s idea of us being confronted by photos of our past when we don’t want to see them, or when we’re not mentally prepared to do so, was something that fascinated me. These unbidden memories, the photographs where no photos should be, can actually change our lives. And then there was this idea that when things are so bad that nothing matters anymore, we are liberated so that we can and should do what we want. It’s really about finally taking charge of our own lives, about not being afraid of anyone or anything, and that we should actually never be afraid.

There are so many songs and books about men doing exactly that (and in a man’s world) and being called heroes, that it’s about time someone wrote a song about women being heroes in circumstances which are much more difficult for them than for men. And that’s why the song references, amongst others, Rosa Parks, the Statue of Liberty, and the symbol of the French Revolution. They are Every Woman.