JAMES EDGE AND THE MINDSTEP - ON A RED HORSE

by JAMES EDGE AND THE MINDSTEP 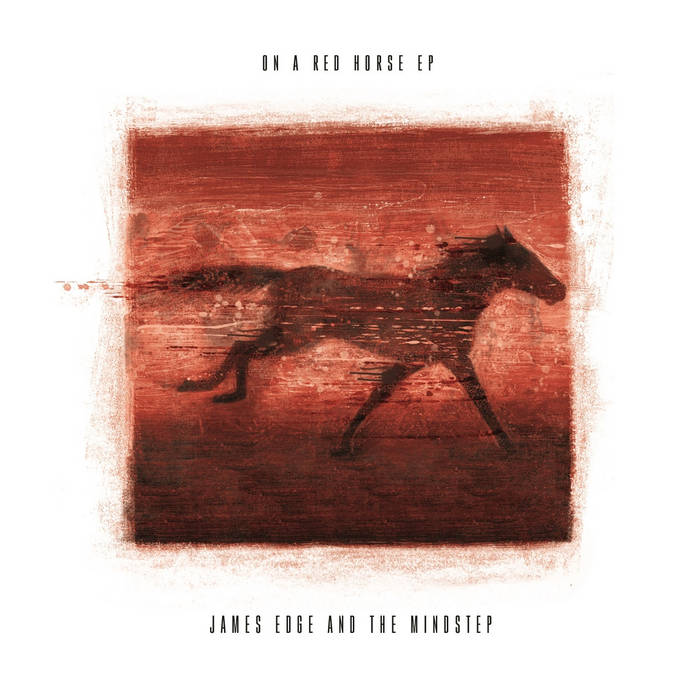 "sublime.. simply beautiful music...the band have carved out a niche where beautiful song writing in the vein of John Martyn and Nick Drake meets the smoky jazz-tinged folk of The Pentangle, and the jagged rhythmic and harmonic complexity of contemporaries like Everything Everything" Never Enough Notes t.co/4l8AhD526e

"On a Red Horse bristles with what-ifs and unpredictable concoctions. The top-of-the-league outcome has been heralded and celebrated- and rightfully so....every song sounds utterly compelling and intoxicating...Altogether, On a Red Horse is a stunning work from one of music’s true innovators." Sam Liddicott musicmusingsandsuch.wordpress.com/2016/04/03/track-review-james-edge-and-the-mindstep-on-a-red-horse/

"Raw energy...an uninhibited clamour" - For Folk's Sake in their video premiere.
"completely and clamorously bonkers. It takes a lot of skilled musicianship to produce musical mania like this, never mind the sky high imagination required to conceive of the idea in the first instance." - Tom Robinson'sFresh On The Net - Fresh Faves

"Twisted aberration of nature" - The Planet of Sound

"like early Radiohead ditched the distortion and picked up acoustic guitars and violins" 102.1 the Edge in Canada


After studying musical composition to postgraduate level with Joe Duddell and starting to gig in 2006, James Edge formed James Edge and the Mindstep to record 2010 debut album In The Hills, The Cities. From the touring that followed, a core jazz-folk trio of Edge, double bassist Andy Waterworth and drummer Avvon Chambers materialised.
Folkstock Records have just released a double A single featuring two tracks from the debut album, ‘Where We’re Going To/ Becoming’ which has gained airplay on Alex Lester’s BBC Radio 2 show and Tom Robinson’s BBC 6 Music Mixtape. The tracks are joined by some newer material from the forthcoming second album, and are on this EP.
“Diverse influences… Yet the resulting melange coheres into a frequently beguiling avant-garde chamber pop” - R2

Take a room full of highly skilled but unrehearsed instrumentalists, supply them with enough musical notation to map their way through a song they’ve never heard before, then hit record and listen to the wild nervous energy that this occult ritual will raise. This is the precarious and painful process that birthed ‘On A Red Horse’ - a song which resists all the tepid and cliched formulae of today’s lukewarm folk pop to stand apart from anything else like some twisted aberration of nature. The word ‘folk’ has become a hub of negative connotations thanks to its adoption by the mainstream, but on this latest track James Edge and the Mindstep wrest it back into serious musical respectability.

The accompanying video was the result of a collaboration with animator Ross Butter and is every bit as unshackled as the music. Taking nearly a year to complete and animated by hand at a few frames each day, it’s the painstaking realisation of a stream-of-consciousness concept birthed in the mind of the group’s songwriter James Edge. Like the music it soundtracks, it doesn’t deal in half measures, and together the pieces merge to present the possibility that maybe, just maybe, there’s still some counterculture left in this world.

"I want to change the way people think about acoustic music and start redefining what it can be. I am pleased to have found, in Folkstock Records, a label brave enough to take on the challenge of releasing something as unusual and abrasive as On A Red Horse".

Together the trio started recording second album ‘Machines He Made’ over a five day period tracking everything live and only overdubbing the backing vocals. The songs were largely unrehearsed, with band members and additional session players mostly having not heard the pieces before. This spontaneous hodgepodge has resulted in some of the most whimsical and deeply experimental music to come out of the capital in a while. The eerie acoustics of Nick Drake inform the atmospherics of much of James’s songwriting, but his sheer compositional nous - which draws on aspects of jazz, modern classical music and punk rock and roll - elevates songs like ‘On A Red Horse’ to a place far above any glib and generic categorisation. He is closer to a modern day Zappa, channelling his eccentric art through folk arrangements to create something deeply surprising, raw, and unnerving.
This EP incorporates songs from James’s two albums, the AA single tracks representing those from his debut album and the others from the second which is as yet unreleased. I hope you enjoy this showcase EP curated to demonstrate his skill and eccentricity as a composer and musician.