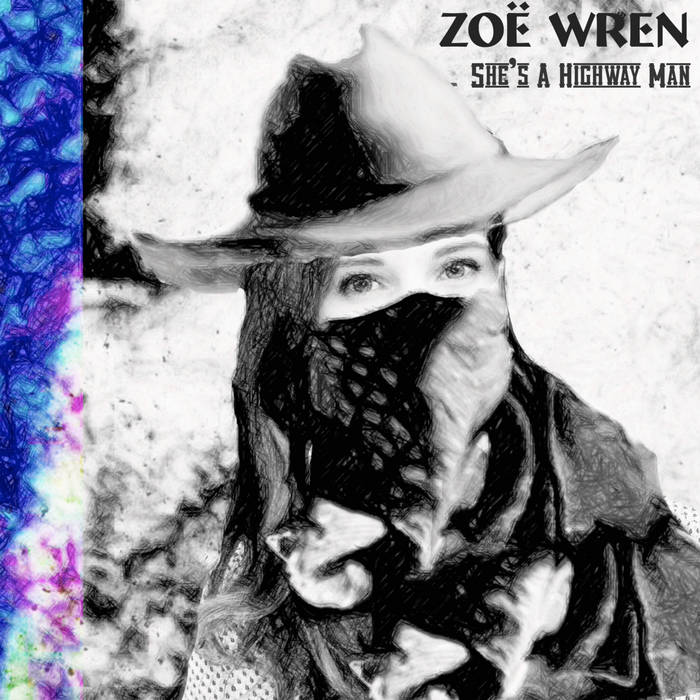 Patrick Talbot Strong melodic content with a stunning voice that makes this song's reinvention of a folk's tale a must listen.

'She's a Highwayman' is a twist on the story of the traditional song 'The Female Highwayman', in which the protagonist Silvie (or Sovay) dresses up as a highwayman and robs her lover in order to test his loyalty. It's a great example of an independent and intrepid heroine in folklore, however in the original story, everything works out fine and goes back to normal. So I wondered what might really happen when Silvie gets her first taste of true freedom, and whether a humorous swapping of gender roles might in fact reveal something a bit more interesting...


Zoe Wren is wonderfully talented young singer songwriter with a gorgeous voice, recently awarded a bursary from the PRS Foundation, as part of the Lynsey de Paul prize. Her last single Nothing to See was played on BBC Radio 2 and she has been on all three Folkstock compilations with great reviews in Sunday Times Culture Magazine. She’s just completed her music degree at Cambridge University, which included a dissertation about the voices of women in folk. Zoe was picked by Brian McNeill to perform on his Stage 2 showcase as well as slots for Hitchin Folk Club at Cambridge Folk Festival, has headlined Redbourn Folk Club and performed at many events in Cambridge and has been on BBC Radio Cambridgeshire, BBC Three Counties and BBC Coventry and Warwickshire. Zoe is now spreading her wings and pursuing her music career full time. She has supported stars like Josienne Clarke and Ben Walker, Peter Knight’s Gigspanner, Jim Causley and Ralph McTell, who recently chose Zoe to open for him at Cambridge Corn Exchange.
Zoe does not come from a ‘musical’ family, and performed a few open mics when she was 14 and 15 with covers, ahead of her debut in the club tent when she was 15 at Cambridge Folk Festival. Afterwards she was surprised to be approached with bookings and realised she had better start writing some songs to perform! Luckily for us all, it’s something which comes naturally to her and we look forward to releasing her second EP Gold and Smoke in February 2017, which is the follow up to the much admired Pandora’s Box which was also recorded and released with Folkstock Records, in 2014.
This new single release, She’s a Highwayman, is coming out on 17th November and was produced by award winning producer Lauren Deakin Davies.


“Zoe Wren has a beautiful voice that is very clear and shivers with silver. The first thing that leaped to my mind was the treasures found at Hissarlik, the Jewels of Helen of Troy, that finely woven filigree, embedded with lapis lazuli and balanced so finely together that they tremble slightly in their museum case you walk past. It’s a wonderful voice and she wears it like the jewels of a queen’ Tamsin Rosewell, Radio Warwickshire.

"It takes an especially strong new voice to rise above the general hubbub of the current English folk song flashmob, but there’s a sort of inevitability about the way that clarity prevails over clamour. Zoë Wren is treading the boards in the folk dens of London town… she has made songs as a playwright might construct a play, and it’s this visible architecture that will make people stop, look and listen" Instrumentali Musicali.

" a finesse voice with the soothing tones of acoustic strumming... presenting Zoe first and foremost to the folk world but with lashings of potential to work the cross genre songbook. She can sing quite comfortably in the classical traditional style and still retain a contemporary charm to captivate the listener" Three Chords and the Truth

“a narrative, story telling quality and pure vocal with a technique that is both a pleasure to listen to and never gets in the way of enjoying the lyrical content of the song. The vocal glissando/portamento adds a lovely quality to the cadences. The rhythm guitar has a driving quality through the choruses and suggests a gradual building of tension towards the song’s climax” Lee at Rock Regeneration

"The F Spot" kicks off with a track that sees Zoe Wren step up to the microphone and really deliver. "Pandora's Box" immediately identifies her as an artist that I want to hear more from. Well the song is delicate, it also has a real strength to it, one that sets a high standard for the following artists and one that has a haunting and hypnotic quality to it.” Neil King, FATEA Magazine

If you have any questions about Zoe, please contact Helen Meissner at folkstock@hotmail.co.uk

Silvie was getting suspicious of all the long nights spent away
Strange disappearances without coherence by night and by day
Is he as true as he says or has he gone astray
She found a solution for her retribution, the price he would pay

She rode and she rode dressed in highwayman's clothes
And she found life was better that way
She felt so damn free, she just couldn't believe
There was no one to heed or obey
When she came home, well she still felt alone
And she wished she was back on the road
She couldn't wait for the next time that she could go

She rode up to her lover while still undercover and pointed her gun
Amazed at the powers that came with the trousers, the test had begun
He trembled and gave her his things, and when he was done
She asked for the ring that she'd once given him but he kept holding on

She rode and she rode dressed in highwayman's clothes
And she found life was better that way
She felt so damn free, she just couldn't believe
There was no one to heed or obey
When she came home, well she still felt alone
And she wished she was back on the road
She couldn't wait for the next time that she could go

Next morning he saw all his things in her drawer and he blushed like a child
He was shocked that a lady could be quite so shady, it dented his pride
He held tightly onto her hand and he begged her to stay
But she found she preferred dressing up in a shirt so she left anyway

She rode and she rode dressed in highwayman's clothes
And she found life was better that way
She felt so damn free, she just couldn't believe
There was no one to heed or obey
She didn't come home, she continued to roam
And she lived her life without a plan
She doesn't care because she's a highwayman