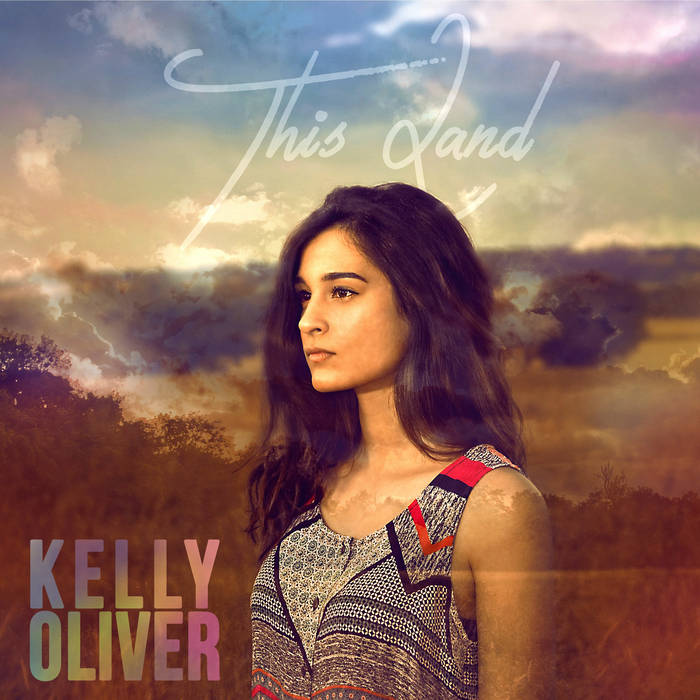 “graceful...stripped back simplicity...an album rich in honesty and...a blossoming talent...golden vocals..storytelling, with classical ease and accompaniment ...While THIS LAND has its feet firmly placed in the traditional camp, there is a potential to reach out to a wider audience” Three Chords and the Truth

“ a manifest pleasure to review an exceptional debut album... it’s been truly wonderful to witness the continued rise of singer-songwriter Kelly Oliver - a lady that's set to become one of England’s premier folk talents. Beautifully-architectured arrangements of guitar and harmonica...
Her voice, rich and natural, silvered and sensuous, cascades lifeblood into her lyrics lifting her songs towards those hidden places where deep feelings dwell. Add an expressive touch on guitar and harmonica and you know that you’re listening to something fresh, vibrant and as essential as breathing...
simply restored faith that sometimes outstanding talent does win through”. Tim Carroll, Folkwords


" Whilst folk is at the core of "This Land", there is a nod or two other parts of the acoustic spectrum, sometimes also bringing in a poppier element, sometimes a bluesier feel, particularly when Kelly gives the vocal chords a rest to remind us that she's a pretty damned fine harmonica player. For the record she's no slouch on the six string either. Kelly Oliver and "This Land" is a complex proposition and yet it all pulls together into a wonderful picture, that draws on the broad canvas of life, it's inspiring in its own right and a damned fine listen time and time again". Neil King FATEA Magazine

“Without any hint of being patronising Kelly Oliver seems to have matured so much in such a short time it almost defies the laws of nature. Oliver may not have been around that long but she has slotted right in and looks and feels at home on the folk circuit like a veteran but having the advantage of her fresh and vibrant sound.
This Land seems to have a retro element built into it.
There is something just so familiar about her voice and yet so new. It has a freshness about it and yet you could take her back to the iconic festivals of the 60s and she wouldn't be out of place at all.
While it would be a little presumptuous to say she is the new Joni Mitchell there is a good chance Mitchell fans will see a great similarity and warm to her.
The opening of Diamond Girl is just so attention-grabbing, it has those gentle uber-folk chords and this time. Oliver's voice has overtones of the incredibly talented Kate Bush. It's simple, effective and just a real pleasure to listen to...she has this ability to reach people at a deep emotional level with her singing. She is fortunate in having talent by the bucket load and o thers have taken years to reach what is Oliver's starting point” Danny Farragher, Folk All.

Welcome to a dramatic collection of thought provoking themes, which are showcased in this exciting debut album from Kelly Oliver, one of the freshest faces on the scene who promises to be one of the fastest rising stars in the folk firmament.
Ranging from traditional songs right through to contemporary folk, 'This Land' demonstrates the versatility of Kelly's voice, musicianship and song writing and suggests a blossoming of confidence and maturing objectivity when compared to her more introspective debut EP Far From Home.

This Land is being released on 27th October at Folktoberfest in Harpenden Public Halls. Herts (which also features Maz O'Connor, Luke Jackson, Jess Morgan and Said the Maiden on the illustrious line up) ánd will be available a month before release at tour dates in September.

Eleven tracks plus a secret slice of gorgeous a capella are being delivered in a jewel case which is transformed into a work of art thanks to the eight page lyric booklet created by Freddy Bulmer, with the music being produced by Lauren Deakin Davies and Kelly Oliver and mastered by Rob Groucutt. Additional instrumentation provided by Sunjay Brayne (Caledonia), Dave Swarbrick (Grandpa was a Stoker) Kaity Rae (Diamond Girl) and Lauren Deakin Davies - Bass guitar wherever it features across the album.

Diamond Girl is the first song to be released off the album. It is a radio edit of the second track from 'This Land' and features the rich and deep vocals of Luke Jackson which creates an exquisite, unique and captivating duet.
Luke Jackson was a 2013 BBC 2 Folk Award double nominee and has released his second album Fumes and Faith earlier this year.
Diamond Girl will be available on special pre release via Kelly Oliver's website and bandcamp ( kellyoliver.co.uk) on 11th September and via iTunes and the usual digital outlets on 2nd October.

Kelly Oliver played guitar, Lauren Deakin Davies played bass guitar and Kaity Rae played Cello.
We are indebted to Help Musicians UK for Kelly's Emerging Excellence Award which has made this album possible and we would like to thank Hohner harmonicas and Sutherland Trading for their continued support and for providing the best instruments for Kelly to make her music.
Thanks also to Whispering Bob Harris's Broadcasting Company (WBBC), Ruth Barnes The Other Woman show for Amazing Radio, Jon Earl for Songs from the Shed, Gaby Roslin on BBC London among others for inviting Kelly to session for them.

Kelly’s brand of Folk is so accessible that you don’t need to be a ‘Strictly Folk’ music junky to enjoy her music. If you like a beautiful voice, lyrics from the heart and warm melodies then Kelly Oliver deserves your attention" Music Crowns

“Kelly Oliver seems to be getting on everyone’s radar ... someone pretty special” Spiral Earth