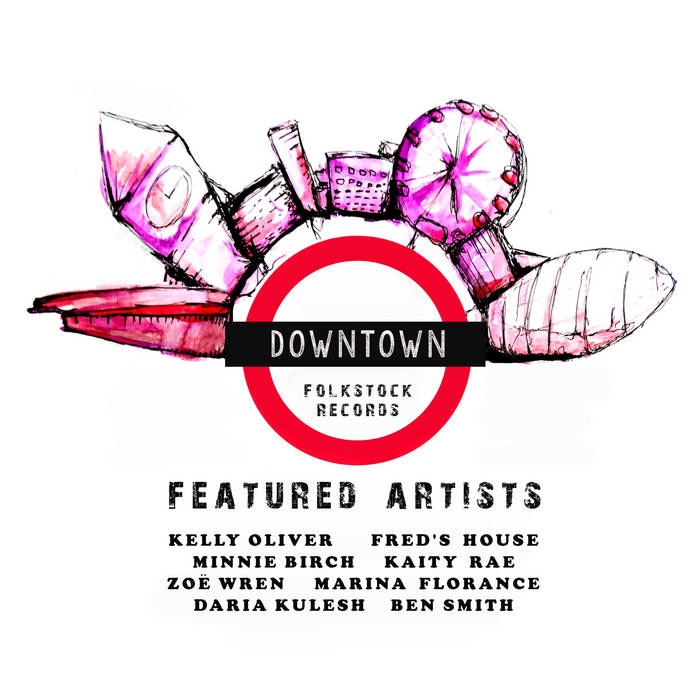 “Folk blurs into tuneful pop on a showcase for emerging artists who also appear at two concerts in this month’s London Folk and Roots Festival. Kelly Oliver, a Folkstock favourite adds a Celtic lilt to Miles to Tralee, while Minnie Birch – who has already gigged alongside Joan Armatrading – carves out her own mid-Atlantic territory on Nashville. Ben Smith’s Let Me Down Easy is sleek and bluesy. Suspended above skeletal piano and dulcimer, Daria Kulesh’s haunting and enigmatic ballad, The Moon and the Pilot, revisits the bleakest years of Stalin’s rule.” Clive Davis, Sunday Times

Catalogue number FSR22.
"Even though each of the selections stands up on its own merits and communicates through its own muse, the sequencing of this compilation displays its own logic, and a straight playthrough is naturally the preferred option for the listener. That’s not to discourage dipping in, of course, but it’s the mark of a good compilation when it cuts both ways.....Downtown is a very persuasive and well-assembled collection, every single performance characterised by a keen degree of accomplishment, a large measure of potential and a sense of real personal and artistic commitment, There’s so much talent out there, and this collection’s both a cause for celebration and a taster for things to come." David Kidman, FATEA Magazine
www.fatea-records.co.uk/magazine/2015/Downtown.html

"Downtown is the latest offering from the Folkstock label which like the indie labels of the 80s and 90s is finding a niche by giving up-and-coming and semi-established artists a great deal of welcome exposure.

It is the brainchild of, and very much driven by the enthusiasm of Helen Meissner and what's even more impressive is she has chosen to concentrate on the folk genre, which tells you she is not in it for the money.
The album is a celebration of all of the Folkstock artists being commissioned as part of two prestigious music events in the Capital - The London Folk & Roots Festival encompasses the Islington Emerging Talent Nights on November 4 and 11 which will feature performers exclusively from the label.

As in previous collections, with Downtown, Folkstock has showcased its impressive pool of talent. Meissner and the team have a definite nose for digging out and giving a platform to some of the most enjoyable singers who are on the edges of the folk radar and could, otherwise, easily be overlooked and that would be an awful loss" For the full review from DannyFarragher please click on this link
folkall.blogspot.co.uk/2015/10/various-artists.html

The two November dates were 'Martin Chilton's Gig Pick' in the Telegraph on 9th October.
The album is free to download for everyone pre booking a ticket to the London showcases when proof of purchase is sent to folkstock@hotmail.co.uk.

All but one of the acts are either solo female acts or fronted by women and this release continues our crusade promoting female talent, which was crystalised with the release of The F Spot Femmes Fatales. Released earlier this year to glowing reviews from The Telegraph and The Sunday Times among others, the promotion of female talent by a label fronted by a woman with a female producer, is close to the heart of the label and a natural position to be embracing.

11th sees Kelly Oliver headlining with Minnie Birch, Zoe Wren and Daria Kulesh. Both gigs are at the Islington and tickets are £8.
dmpuk.com/live/events/11-nov-15-folkstock-emerging-talent-night--kelly-oliver-the-islington/

DOWNTOWN is opened by the next single from Kelly Oliver off her forthcoming second album which is due out next Spring.
The single Miles to Tralee is being released on November 20th.
All the artists performed at Folkstock's first festival in September 2013 and have been supported by the musical community is has formed ever since.